New London, Conn. – November 13, 2019 – On November 12, 2019, leadership from global developers and manufacturers in the offshore wind industry toured State Pier in New London, Connecticut. A public-private partnership aims to significantly upgrade the Pier’s infrastructure, transforming the facility into a major hub for offshore wind in the Northeast. The Pier’s infrastructure upgrades have a $93 million total projected cost, with joint venture partners Ørsted and Eversource committed to paying more than $57.5 million and the State of Connecticut funding $35.5 million. This major construction campaign will create hundreds of new jobs. Once construction is completed, the region will benefit from a significantly upgraded State Pier that will be able to serve both near-term and long-term offshore wind and conventional cargo opportunities.

Following infrastructure improvements at the Pier, slated to be completed in early 2022, Siemens Gamesa will begin assembling turbines to power the 1,700 MW of Northeast U.S. offshore wind farms, awarded by Ørsted/Eversource earlier this summer. Assembly operations at State Pier are projected to create a range of OSW-related jobs such as technicians, stevedores, crane operators, electricians, welders, and other skilled positions.

The joint venture’s proposed Constitution Wind project stands to generate significant economic benefits, including a total GDP impact to Connecticut of $700 million. The project will also create more than 5,600 direct and indirect jobs across the Northeast, including approximately 300 offshore wind-related jobs with the revitalized New London State Pier.

“Connecticut offers promising advantages for the offshore wind industry and we are pleased to work with Ørsted and Eversource to bring large-scale offshore wind projects to the U.S. through New London State Pier where the Revolution Wind, Sunrise Wind, and South Fork turbines will be staged for construction.”

“Our Constitution Wind proposal will deliver enough clean energy to power more than 600,000 homes, while transforming the port of New London into one of the nation’s premier hubs for offshore wind. It is truly a remarkable opportunity made possible by our partnership with global offshore wind leaders like Siemens Gamesa. Deep knowledge of the industry and unparalleled expertise are what it takes to make offshore wind projects a reality, and we are incredibly proud to have Siemens Gamesa with us on this journey.”

“Working together, Eversource and Ørsted are well-positioned to help Connecticut meet its carbon reduction goals while delivering clean energy at a competitive price. Through Constitution Wind, Connecticut’s residents, businesses, and communities will be able to rely on clean, renewable energy. With Siemens Gamesa as our partner, New London’s State Pier will serve as thriving home for the offshore wind industry, bringing a robust supply chain and economic growth to the region.”

“Gateway is pleased to be part of the team that will drive the growth of a major new industry in New London.  We look forward to an upgraded State Pier serving as the base of operations for offshore wind in Connecticut and are excited about the new opportunities that the addition of an international leader in clean energy like Siemens Gamesa will bring to the region.”

“Energy Committee leadership took the opportunity to explore ways to maximize use of the New London State Pier and rail line infrastructure to create new clean energy jobs. We will continue working with the local community to maximize the impact and opportunities created by this project, while keeping costs affordable for customers.”

“I was proud to welcome Siemens Gamesa along with the Constitution Wind team to State Pier. It’s the next step toward the revitalization of State Pier and the realization that this promising new industry may soon call New London home.” 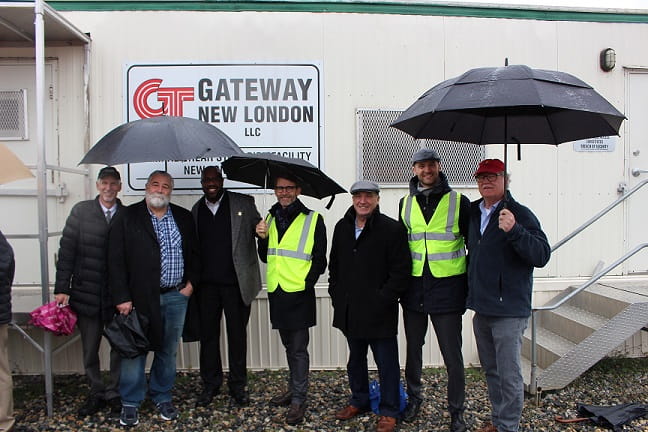