Ørsted to develop Power-to-X-facility on Gulf Coast to fuel Maersk’s newly ordered fleet of 12 methanol-powered vessels, as the industry leaders sign letter of intent (LOI) on record-breaking offtake agreement for green fuels in the maritime industry. 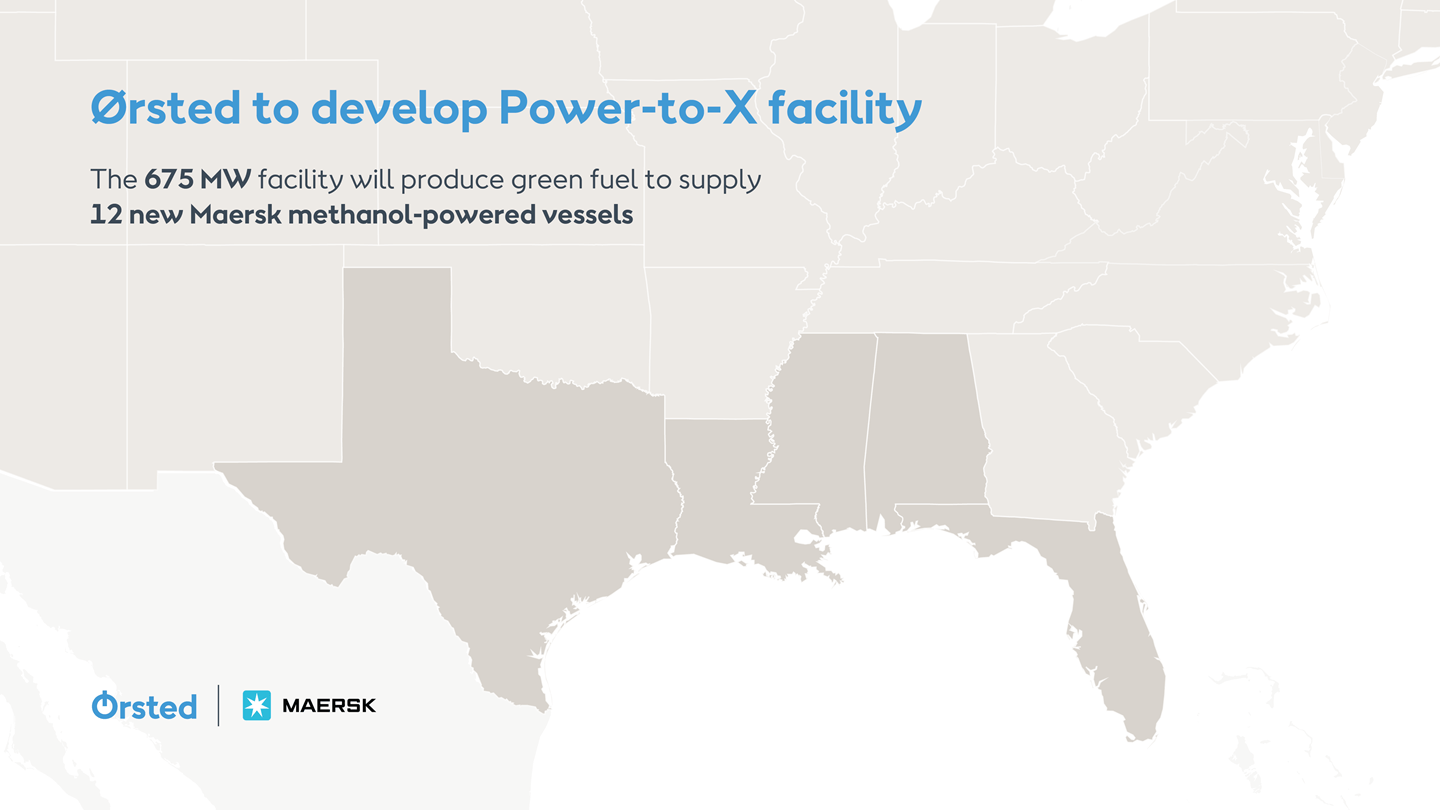 Austin, Tex. – Over the past two decades, greenhouse gas emissions from the global maritime industry have risen sharply to account for around 2 percent of global energy-related emissions. As the world races to fight climate change, the maritime sector urgently needs new zero-emission fuels at scale to reduce its climate impact.

Now, A.P. Moller - Maersk, a world leading integrated container logistics company, and Ørsted, a world leader in renewable energy, have signed a letter of intent (LOI) about partnering on a new Power-to-X facility in the U.S., which will become a landmark project in the green transformation of international deep-water shipping and set the standard for future large-scale production of green maritime fuels.

On the Gulf Coast, Ørsted will develop a 675 MW Power-to-X facility that will produce approximately 300,000 tons of e-methanol per year, which Maersk will offtake for its newly ordered fleet of 12 methanol-powered vessels. The facility will be powered by approximately 1.2 gigawatts (GW) of renewable energy from new onshore wind and solar PV farms. The biogenic carbon needed to produce e-methanol will be extracted through carbon capture at one or more large point sources.

The project is targeted to be commissioned in the second half of 2025, making it by far the most ambitious project globally producing e-methanol at scale and a driving force in the decarbonization journey of the maritime sector. Final investment decision could be made in late 2023.

The 300,000 tons of e-methanol are the largest potential offtake agreement for green fuels in the maritime industry ever announced, and it is a testimony to the action taken to shape green ocean transport by both Ørsted and Maersk. The agreement also marks Ørsted’s entry into the U.S. Power-to-X market, a new strategic market for the company as it seeks to construct 50 GW of renewable energy capacity by 2030.

Martin Neubert, Deputy CEO and Chief Commercial Officer at Ørsted, says: “We commend Maersk’s clear and ambitious action, which has made the company a leader in the difficult task of reducing the climate impact of the maritime industry. Partnerships with large offtakers of green fuels, like Maersk, is an important part of Ørsted’s strategic journey, as we broaden our Power-to-X footprint across the world to become a global leader in renewable hydrogen and green fuels. The project with Maersk is our first in the US, and we look forward to help accelerating the U.S. Power-to-X market while creating local jobs and economic activity, just as we’ve done in the growing offshore wind industry in the U.S.”

Henriette Hallberg Thygesen, CEO of Fleet & Strategic Brands, A.P. Moller – Maersk says: “To transition towards decarbonization, we need a significant and timely acceleration in the production of green fuels. Green methanol is the only market-ready and scalable available solution today for shipping. Production must be increased through collaboration across the ecosystem and around the world. That is why these partnerships mark an important milestone to get the transition to green energy underway.”

Neil O’Donovan, CEO of Ørsted Onshore, says: “The Gulf states have an abundance of cheap renewable energy resources, both solar and wind, making the region a natural location for large-scale production of green fuels, which we expect there will be a very large demand for in the U.S. going forward. The Power-to-X project with Maersk will expectedly be powered by approx. 1.2 GW of new onshore wind and solar PV, which in itself represent a significant investment in the region, while also helping Ørsted reach its target of 17.5 GW of installed onshore capacity in 2030.”

The Power-to-X project in the Gulf Coast is the second green fuels collaboration between Ørsted and Maersk, after the potentially 1,300 MW Green Fuels for Denmark project in Copenhagen, which the two companies are partnering on with other large offtakers. Ørsted and Maersk will continue to investigate opportunities within green fuels together, as Maersk works towards its 2040 net-zero commitment.

In total, Ørsted’s Power-to-X development pipeline consists of 11 projects, including the 70 MW FlagshipOne project in Sweden, which Ørsted is developing together with Liquid Wind. FlagshipOne is targeted to be commissioned in 2024 and could become one of the world’s first large-scale sustainable e-methanol facilities. In addition to the project pipeline, Ørsted has entered into several strategic agreements with a variety of partners.

The Ørsted vision is a world that runs entirely on green energy. A global clean energy leader, Ørsted develops, constructs, and operates offshore and onshore wind farms, solar farms, energy storage facilities, and bioenergy plants. Ørsted is the only energy company in the world with a science-based net-zero emissions target as validated by the Science Based Targets initiative. Four years in a row, the company was ranked the world’s most sustainable energy company by Corporate Knights.

In the United States, the company has a growing portfolio of clean energy assets and partnerships that includes offshore wind energy, onshore wind energy, solar and storage technologies. A leader across the renewable energy sector in the United States, Ørsted holds the top position in offshore wind energy with approximately 5 gigawatts in development and operates America’s first offshore wind farm, located off the coast of Block Island. Ørsted has a total U.S. onshore capacity of 4.2 GW across wind, solar and storage technologies. To learn more about the Ørsted U.S. business, visit us.orsted.com or follow the company on Facebook, Instagram and Twitter (@OrstedUS).

A.P. Moller - Maersk is an integrated container logistics company working to connect and simplify its customers’ supply chains. As the global leader in shipping services, the company operates in 130 countries and employs approximately 95,000 people.