As part of its ongoing commitment to bring cleaner energy to its customers, Dominion Energy Virginia is moving forward on the mid-Atlantic’s first offshore wind project in a federal lease area. It has signed an agreement and strategic partnership with DONG Energy to build two 6-megawatt turbines off the coast of Virginia Beach. 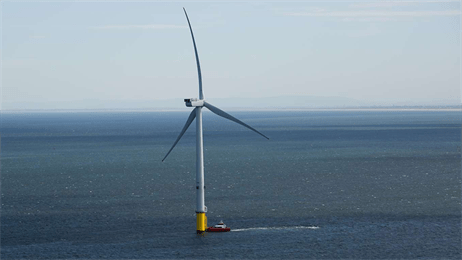 One of DONG Energy's turbines in the UK.

Dominion Energy (NYSE:D) is one of the nation's largest producers and transporters of energy, with a portfolio of approximately 26,200 megawatts of generation, 15,000 miles of natural gas transmission, gathering and storage pipeline, and 6,600 miles of electric transmission lines. Dominion Energy operates one of the nation's largest natural gas storage systems with 1 trillion cubic feet of storage capacity and serves more than 6 million utility and retail energy customers.

The company marked the occasion by announcing it has received site assessment plan approval from the Bureau of Ocean Energy Management (BOEM) for Ørsted’s utility-scale, offshore wind project, Ocean Wind, to be built on a federal lease in waters approximately 10 miles off the coast of Atlantic City.

“We are thrilled to receive the news of the BOEM approval on the same day we opened our office in Atlantic City,” said Brostrøm. “Ocean Wind will produce reliable clean energy for New Jersey with scale that maximizes job creation, cost effectiveness and economic benefits for the state and local communities. We look forward to continued collaboration with BOEM as we work to make New Jersey and the U.S. a hub for offshore wind.”

Ocean Wind is capable of generating more than 3,000 MW of power – providing enough energy to power 1.5 million homes and businesses.

“We are fortunate to be pursuing our project at this time in the state’s history when we have Governor Murphy and First Lady Tammy Murphy calling upon state entities and numerous stakeholders to all work together to share in the Governor’s vision of creating 3,500 megawatts of offshore wind generation 2030,” said Brostrøm. We are ready to do our part in achieving that goal.”

“It’s a pleasure to partake in this historic moment, as we welcome and open Ørsted’s official New Jersey office,” said First Lady Tammy Murphy. “As a charter member of the Climate Reality Action Fund and a longtime advocate for environmental policy, I have seen firsthand the destruction and loss associated with the failure to act on climate change. Offshore wind can power a state’s future path and drive its economic future. I am thrilled to see the state of New Jersey headed for a cleaner and greener direction.”

The company also announced its first local hire, Monica Coffey of Margate, formerly Communications Manager at the Atlantic County Utilities Authority. Coffey will serve as Manager of Community Relations & Communications and work from the Ørsted office located on Pacific Avenue in Atlantic City.